Household garden is an exploration about planting vegetables in every household. As we know, there are not many Cambodian are planting vegetables in their house, instate they go to the market to buy those vegetables even though they know that the vegetables are chemical. Most people buy vegetables from the market, even if they know that farmers use chemicals but they still buy it. Those people don’t really want to eat those vegetables but they don’t have any other choice. The goals of this exploration are to convince Cambodian to plant their own vegetables so they don’t have to buy those vegetables with lots of chemicals. We also want to change the opinion of the farmers from using chemical to organic. We are also going to teach them how to make compost so that they can use it. We have been to Takeo province to learn about the vegetable and how to make organic fertilizer and organic pesticides. We also went to Saang village to interview people about their planting. This is my reflection from the trip.

My goal to Saang district is to know what people use for the plant(Chemical or organic)? I think that most people in Saang use chemicals but I want to know, how many Farmer are using organic. I have heard the rumor about putting vegetables into chemical leave it for a night and it will grow really fast, from the size of the thump to the size of wrists. I have heard about that then I wanna make sure is it true?

I’ve learned so many things from the trip. I and my exploration members have interviewed 25 people. As we interview we have known that none of them use organic, they all use chemicals. Also, a few of them want to try to use organic but they don’t have enough resources to use organic. Besides that people don’t want to try to use organic because they think that no one in that village uses organic and if they use it they afraid that it won’t work because no one has experienced it. They mostly pant salad and sugar palm in that village. They use chemical on everything even the sugar palm but they use put less on it because they don’t need much chemical. I’ve also learned about the rumor that I wonder about. It’s real! People use it when they need to. Example the cucumber, if the cucumber is the size of the thump and the middle man really need it for sale, the farmers have to use those chemicals to make it grow fast for just overnight so the middle man will have it for sale for tomorrow. Sometimes, we know that the cucumber is used in the overnight chemical by cutting it to see the middle of it and if there are whole in the middle it means that cucumber used in chemical. There is also chemical for the plant not to grow tall. People don’t want the plant to grow tall because they want the plant to grow to the side and it looks bigger and most customers like it because they don’t know that it’s chemical.

For one day, I’ve learned about chemical, what they plant how many are using chemical? how many people wanna try to use organic? I also know more about the rumor. In the future, I hope that I can change their mindset, not everything but at least something. I would like to do a workshop with them about the effect of using chemical and also to teach them how to make compost. 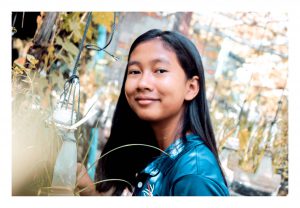